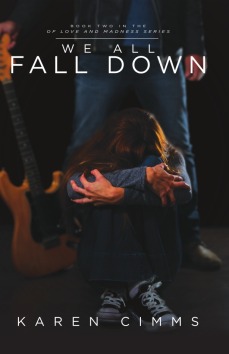 Being married to a rock star isn’t all it’s cracked up to be.

Kate and Billy McDonald have defied the odds. For twenty-two years they’ve loved each other fiercely, but it hasn’t always been easy. On the road most of the time and fighting for a foothold in the music industry, Billy struggles to make a name for himself. Frustrated and angry, he relies on dangerous methods of coping, until one night, after facing the guilt of his biggest regret, he makes a mistake that could bring his entire world crashing down around him.

Amazed at how far they’ve come from their rough beginnings, Kate cherishes her life. Sure, there are things she’d change, like having Billy home more and having a better relationship with her daughter. But when a startling betrayal follows on the heels of an unbearable loss, Kate’s world spirals out of control, leaving her staggering and wondering if it’s even possible to pick up the pieces.

What happens when love implodes? Can it rise from the ashes, or will we all fall down?

We All Fall Down is the second book in the Of Love and Madness trilogy. A love story that unfolds over twenty-five years, it’s the tale of two damaged people trying to make their way in the world without destroying themselves or each other in the process. 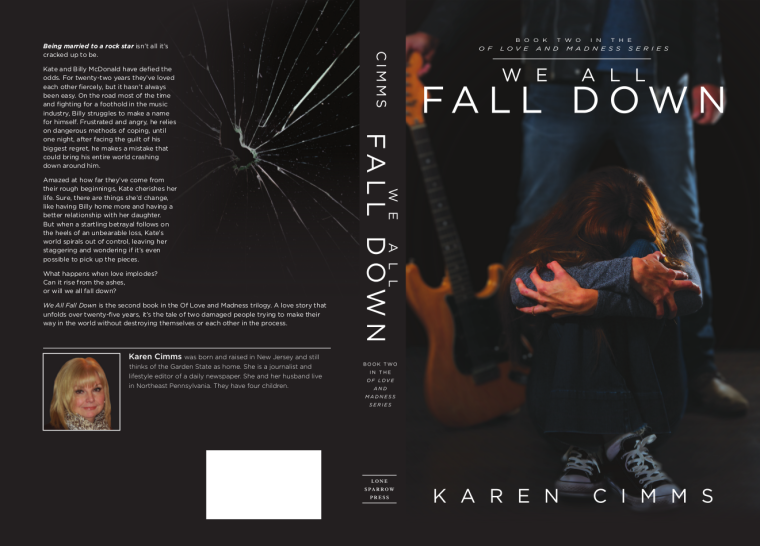 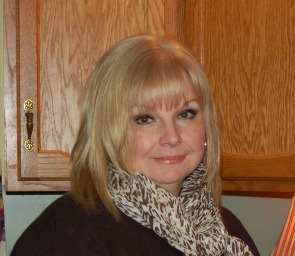 Karen Cimms is a writer, editor, and music lover. She was born and raised in New Jersey and still thinks of the Garden State as home. She began her career at an early age rewriting the endings to her favorite books. It was a mostly unsuccessful endeavor, but she likes to think she invented fanfiction.

Karen is a lifelong Jersey corn enthusiast, and is obsessed with (in no particular order) books, shoes, dishes, and Brad Pitt. In her spare time she likes to quilt, decorate, and entertain. Just kidding–she has no spare time.

Although she loves pigeons, she is terrified of pet birds, scary movies and Mr. Peanut.

Karen is married to her favorite lead guitar player. Her children enjoy tormenting her with countless mean-spirited pranks because they love her, or so they say. She currently lives in Northeast Pennsylvania, although her heart is usually in Maine. 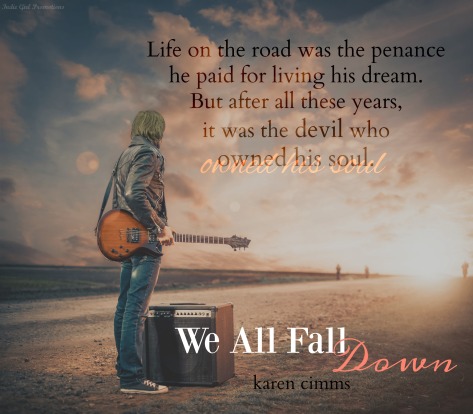 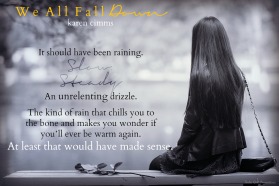 portrait of a lonely girl 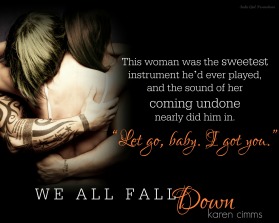 Billy cursed under his breath.

“Look, Billy, it’s only three weeks, but it’s a big three weeks. The new songs are great, but we gotta road test them. You keep this up and I can guarantee you a record deal, but I have to get you out there. People need to hear you. There was a lot of buzz after that performance in Miami this summer, and to tell the truth, the arrest and all the rest of it didn’t hurt that angry rock star image, either. There’s no bad publicity, not for someone like you, but fans have short memories.”

“Look, it’s just three weeks. She can’t be without you for three freaking weeks?”

Could she? She was getting worse, there was no doubt about it. But if she started seeing the doctor, and if he could talk her into staying with Rhiannon . . .

“I don’t know. I guess. I’ll figure something out.”

C.J. was all business. “Okay, then. I’ll have a car pick you up first thing Monday to bring you straight to the airport. I’ll meet you there, and we’ll sign the contracts. Just leave everything to me.”

“And Billy? I had to pull a lot of strings to get you on this leg of the tour. This is the perfect audience for you. Don’t screw this up. You’re not a cat. You don’t have nine lives, and even if you did, you’ve about run out.”

A door clanged open. Tom stood and walked toward the hallway, then nodded in her direction. She tucked her clutch under her arm and followed.

Billy’s back was to her as she came around the corner. Snug black jeans hugged his long legs. A long-sleeved black shirt with the tails out and the cuffs turned up showed off the tattoos covering his forearms. His hair was messy and loose, hanging well past his shoulders. He and Tommy were speaking, and when Tommy glanced in her direction, Billy turned slowly, then snapped back to Tommy when he realized who was standing behind him.

“What the fuck is she doing here?” he practically growled. “I didn’t tell you to call her.”

“He didn’t call me,” she answered, hurt as well as angry. “And is that all you have to say?”

The man standing before her was a far cry from the one she’d kissed goodbye over two months ago. His neatly trimmed goatee had grown out into a scraggly beard. He needed a shower badly, and although it was the middle of the night, he wore sunglasses. A long, thin cut above his eyebrow was held together with several Steri-Strips. Another near the bridge of his nose had begun to swell. An angry red mark blossomed on his cheek, and there were hints that his eye would soon be black and blue.

“If I wanted you here, I would’ve called you. You shouldn’t be here.” He scowled at Tommy as if he were the reason behind all of them being there.

Kate slipped off the sergeant’s jacket. “Neither should you.” She tapped on the thick glass to get the desk officer’s attention, then waited by the inner door until she came around to retrieve the jacket.

Billy watched as she walked back, his mouth curling into that trademark smile, the one that still caused her to melt like a teenager.

Not this time. This time, she was pissed.

“Well, I see you came dressed to impress.” His grin grew, and the cut on his bottom lip split open, blood welling in the spot. A memory flashed before her of a night long ago when she hadn’t been nearly as angry as she was now, yet she had punched him in the stomach.

She’d been standing in the rooftop garden, looking out over Tribeca toward the Freedom Tower, when he came up behind her and put his hands on her shoulders. Surprisingly, she leaned into him. Other than the times she’d allowed him to hold her when she cried or kiss her good night, they’d hardly touched. Emboldened, he wrapped his arms around her. He felt rather than heard her sigh. They stood there watching the sun reflect off the glass of the lone tower as it lowered in the late afternoon sky. He would have stood there as long as she wanted—until the sun fell all the way into the Pacific Ocean, if need be.

“I have something for you.” Taking her hand, he led her to a chair. He sat across from her and pulled the iconic blue box from his pocket.

“I’m ashamed to say it’s your birthday present, but that’s what it is. I’m sorry I didn’t give it to you before. I had it. I even have the receipt, if you don’t believe me. I bought it in Atlanta. I was too busy screwing up to give it to you.”

She rested the box in her lap as carefully as if he’d told her it was a vial of nitroglycerin.

She tugged off the white satin ribbon, letting it drift to the floor, and lifted the bracelet from the box.

“They’re olive leaves,” he said. “Of course I didn’t know I’d be needing an olive branch when I bought it. Kind of appropriate, don’t you think?”

“It’s beautiful.” She slipped it over her delicate wrist, admiring it, and then leaned forward and kissed him—a kiss that started out chaste, but she took it further. Much further.

At that moment, he’d believed he was forgiven, that no matter what happened, they’d be okay.

But now he wasn’t so sure.

A guide to manic depression (that you always wish you had) combined with my crack at cooking delicious food.